For those interested in gluten-free products, here’s info about FDA regulations and product labeling:

Yesterday, I decided to bake, for these reasons:
1.I have new ramekins which I had not used yet,
2. In the fridge were a nectarine, a black plum, and a golden delicious apple, all waiting to be used, and
3. The temperature and humidity outside were a lot more bearable, so I did not mind turning on the oven yesterday.

I washed and cut up the three fruits.  (If you read the posting from March 5, you know that I did not pare any of the fruits.) I sautéed the fruits with nutmeg, cinnamon, vanilla extract, and bourbon.  While this mixture simmered, I made a topping of oats, gluten-free flour, pecans, cinnamon, brown sugar, and room temperature butter. At the last minute, I decided to divide the fruit mixture among three ramekins instead of two and baked the fruit crisps for 30 minutes at 350 degrees.

Would you like yours with a scoop of vanilla ice cream or a dollop of whip cream? Why not both?

About a year ago, I discovered Crispy Cat, a candy bar sold in the organic/health sections of many grocery stores. The front label states that it is vegan, gluten free, and all natural. Not only that, it is dark chocolate – the healthy chocolate. I bet your doctor would tell you that it is in your best interest to eat his candy, right?

I check out the bar in a green-colored wrapper; the flavor is Mint Coconut. The ingredients list organic brown rice crisp as one of the ingredients – the crispy part of the bar. Hmm, interesting. I’ve had chocolate with mint, chocolate with coconut, and chocolate with crisp rice. But all three together? Think of it as a York Peppermint Patty, Mounds Bar, and Nestle Crunch all in one. Curious, I bought one of these bars to see how it tastes. I tried it almost immediately as I got home.  Mmmm; that is one scrumptious candy bar!  I do not remember, but most likely, I ate the entire bar quickly, as it was that good.  I’ve bought this candy bar several times now when at the grocery store. Then, one day, it was not in stock.   The following week, same thing.  No Crispy Cat bars to be found.  After three or four weeks of wanting a Crispy Cat and not finding one, I went online and purchased a box of them.

I melted dark chocolate chips and chocolate mint chips together; the proportions were about 3:1 of chocolate to mint.  Then I stirred in some flaked coconut, sliced almonds, and crisped rice cereal.  (I did not measure anything;  I simply eyeballed it.) After spreading the mixture on a wax-lined baking sheet, I placed the baking sheet in the fridge.  In less than an hour’s time, I had my own Crispy Cat-like candy to enjoy.

The other day, I decided to make this chocolate bark again.  It was either the third or fourth time I have made this concoction. I did it differently this time, though.  Instead of mixing all the ingredients together, I stirred the crisped rice into the melted chocolate and spread it out on the baking sheet.  Then, I added the mint chips, almonds, and coconut, in different sections and in different combinations.

Thinking of the pan of chocolate bark as a 3×3 grid, I placed different combinations of the three toppings on the chocolate mixture.

This gives your guests (or customers?) a choice in what they would like to taste.  Myself, I’ll go for a piece of the bark which has all three toppings.

Care to try a sample?

I’ve noticed chia seeds added to a lot of products lately – nutrition bars, cereals, breads, and also drinks. I asked about the health benefits of chia seeds while at a local health food/organic grocery store, and apparently, there are many health benefits:

While looking at some smoothie-type beverages which contained chia seeds, one of the store employees told me ways that I could make my own drinks and puddings with very few ingredients and save myself some money.  Since I hadn’t eaten chia seeds or chia powder before, and not knowing if I would like the taste or not, I bought a small amount from the bulk section.

At home, I mixed a cup of blueberry flavored Kefir milk and about 1/3 cup of black chia seeds.  As instructed, I let it refrigerate overnight.  The next day, the pudding-like mixture was ready.  I added some fresh berries, slivered almonds, and unsweetened coconut on top, as I might do with a yogurt parfait.  After a couple of bites, I drizzled a little blue agave nectar on top, as I felt it was missing something, taste-wise. 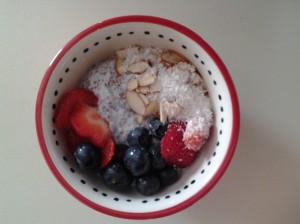 To me, the chia seeds had the texture of sesame seeds, yet very little taste.  I would not object to using chia seeds again for their health benefits; I would not have them be one of the predominant flavors in recipes, though, opting for something with more flavor.

On delicious living magazine’s website, there is a gluten-free cookbook to download for free.  The booklet includes 25 recipes for desserts, smoothies, main dishes, and side dishes:

As warmer weather settles in, we will need something cool to eat….

Why I LOVE Greek Yogurt Pops:

I love cold desserts during the hot summer months, so I thought it would be fun to try out this healthy popsicle recipe!  I started by visiting World Market and purchasing a popsicle maker kit, but you can use ice trays as well. 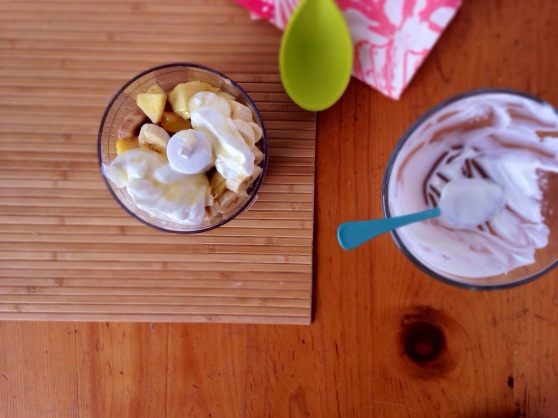 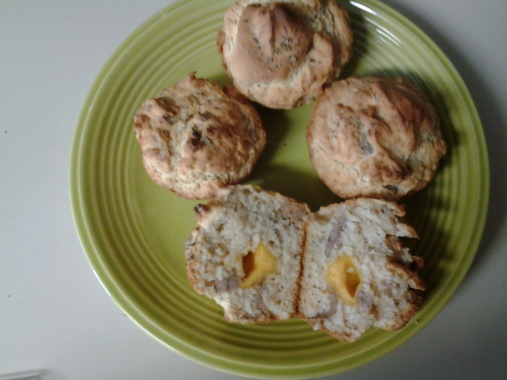 I made breakfast yesterday, using one of the breakfast muffin recipes that I posted last week.  The bacon and cheese muffins sounded good to me, so that was the plan.  I had sausage  but not bacon, and remembering my vow to be resourceful and not wasteful, I decided to use the sausage on hand instead of buying bacon.  I used Applegate Natural links which are gluten free.  I thinly sliced two links for the recipe. 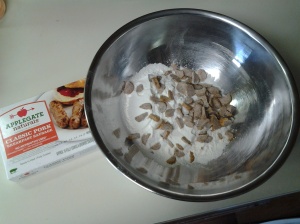 Usually, when I fill muffin tins, I tend to put too much batter in each cavity.  As a result, I often end up with only 10 or 11 cavities filled , and thus not a complete dozen. This time, though,  there was only enough batter to fill six of the twelve cavities. 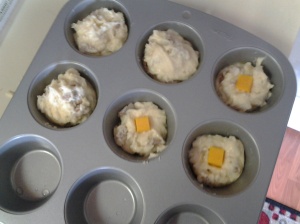 The recipe came from a muffin cookbook I bought years ago.  It did not specify using a mini-muffin tin, and the muffins in the photo appeared to be regular sized.  So, why after using the measurements prescribed, did I end up with only a half-dozen?  The biscuit mix was a gluten-free variety.  That sometimes affects the consistency of what is baked, but it shouldn’t affect the amount of  batter produced. Any thoughts?

Twenty-some years ago when I graduated college and got an apartment, I bought a couple of cookbooks and clipped recipes from the newspaper, so that I could teach myself how to cook a variety of foods, so that I could have a variety of meals.
One of the first recipes I came across was called Morning Brownies. This, of course, appealed to me as it was an excuse to have not only chocolate for breakfast, but brownies to boot!
I still have this recipe, though, I’ve upgraded the newspaper clipping into a typed word document.
As I came across the Morning Brownies recipe the other day, I thought that I should redo it so that it will be gluten-free. I will post the original recipe on the Recipes page of this blog; I also have it posted on wwww.tasteofhome.com as Breakfast Brownies Recipe. Keep reading here for the gluten-free variety.

END_OF_DOCUMENT_TOKEN_TO_BE_REPLACED

A couple of weeks ago, I made waffles with Bisquick Gluten Free and was very disappointed in it. This morning, I made pancakes, using Cherrybrook Kitchen’s Gluten Free Dreams Chocolate Chip Pancake Mix. It is rice flour-based, something I am learning to tolerate more and more as I attempt to cut back on gluten.

The directions require rice milk, so that is what I used. I have only used rice milk once before, and I remember it being a much thinner consistency than milk. I kept this in mind, thinking I might need to add more dry mix to thicken out the batter.  I often do this anyway when making pancakes.

END_OF_DOCUMENT_TOKEN_TO_BE_REPLACED

Endangered Species brand chocolate is a good quality chocolate.  It’s a rich dark chocolate bar, available in many delicious flavors.  And, yes, it is vegan and gluten-free.   You can find the candy bars in health sections of grocery stores as well as some gourmet shops.  Their website features recipes.  The link below is for a chocolate mint cupcake.  When the recipe is followed according to the website’s instructions, the cupcake will be gluten-free:

Lover of math. Bad at drawing.

analyzing the circulation of discourse in society

A twentysomething's mission to make better food with little time, money, and experience

Have your cake and eat it too, without feeling sick.

working with three words a day

Everyday, Everywhere We Are Guided Towards Happiness

adventures in discourse and dinner

A blog about healthy cooking and eating with kids.

17 and Baking
The Gourmand Mom

Good food, seasoned with a dash of life

I'm a goofball who likes to cook. These are my stories.

The Art and Craft of Blogging